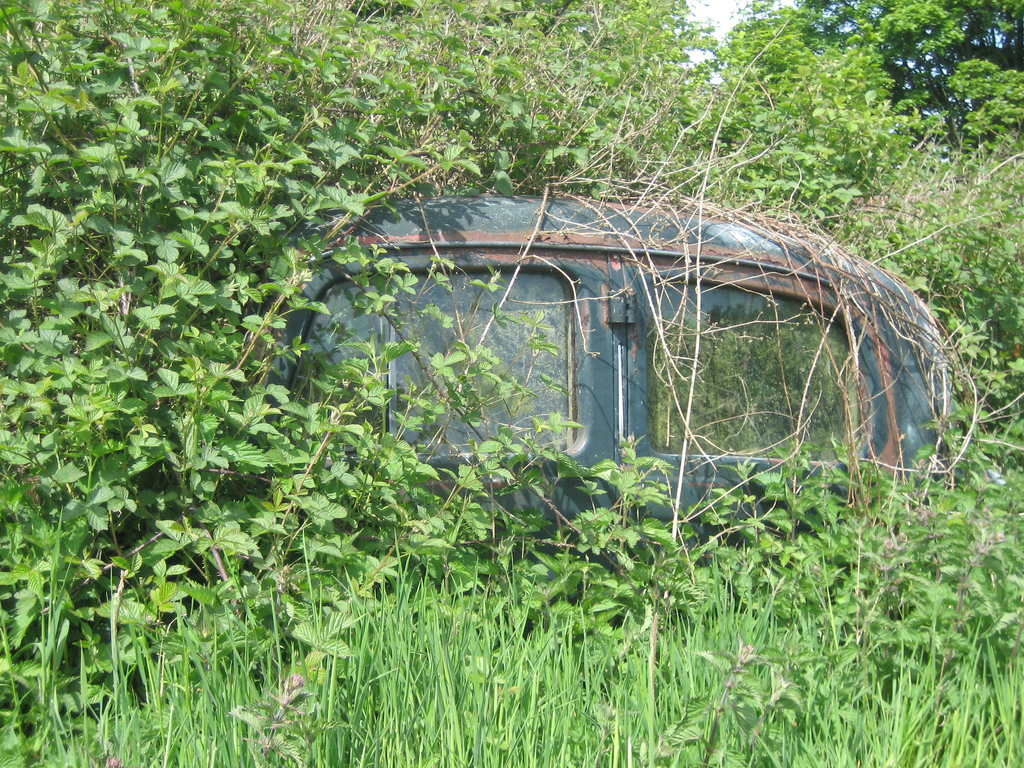 This week in 52 Stories: The Labrador Fiasco by Margaret Atwood. It is anthologised in Moral Disorder And Other Stories. It is also available online.

S insisted she was there where it happened. It was a dinner party, S and a companion, a married couple and the hostess. The conversation had turned to disastrous trips and the husband of the couple began his tale. A terrible holiday, rain soaked and broken down.

“You remember?” he said to his wife. She did not reply.

He piled on more detail, more rain, bad food. A rat. “Come on. You must remember. You were there. You took us,” he said.

His wife regarded him coldly. “That,” she said at last, “was your mother.”

I was friends with S a long time ago and, by now, we must have forgotten almost everything we said to one another. What’s left, really, is a few fragments. But that little shard has remained. I imagine his realisation. The perfect hanging moment in which he must have understood exactly what he had just revealed. He must have known for certain that there was no going back.

Some time in that layer of my life, my father fell ill. He loved to drive. He drove with a kind of predator aggression — which is not to say wildly, but with control and power and assertion. He first noticed the pain in his leg on a journey for work. My mother looked out the hospital window at the West London traffic. It was late spring and the air outside was rich with sap and exhaust. Many Saudis had come to the hospital to be ill too. He had a little motorised syringe that whirred meanly and dispensed an opiate dose every twenty minutes or so. My mother looked down and said, “There’s a car there just like yours.”

Years and years later, I visited my mother in the hospice.

“Where’s your boyfriend?” she said brightly.

“Your other half. Your bloke.”

“Wrong brother,” I said and grinned, as if this were an easy mistake to make. We’d left the path and we’d not find it again.

It is the story of the narrator’s father and his decline over several weeks. During this time, the narrator’s mother reads a story aloud to her husband – although we do not hear it told in her voice. The narrator, in fact, reads and summarises the tale which describes an early Twentieth Century trek along a remote Canadian river. Two upper middle class friends, Hubbard and Wallace, hire George, a Cree Indian, as a guide and purchase provisions. Then the party sets out for doom.

This combines two tropes we recognise at once. To the companions, at first, it is a tale of adventure and discovery.

[Hubbard’s] idea was that he and his chum and cousin — whose name was Wallace — would penetrate the last unmapped Labrador wilds, and he would write a series of articles about their adventures, and thus make his name.</p>

To the reader, though, forewarned by the title of the story and by the narrator’s comments, it is a familiar tale of hubris and incompetence leading inevitably to failure and death.

In stories like this, there is always — there is supposed be — an old Indian who appears to the white men as they are planning to set out. He comes to warn them, because he is kind at heart and they are ignorant. “Do not go there,” he says. “That is a place we never go.”

But no-one warns them. Listening to the tale, the father stands in for the wise Indian, though it’s too late to warn anyone and he is, in any case, inspired more with schadenfreude than sympathy. The way that the narrative actually plays out dials back on the significance of the explorers. No-one appears to them because they just don’t matter that much. They are doomed by their failure to ask the right questions.

Hubbard and Wallace tried to hire several Indians to come with them, at least on the first stages of the journey… None would go; they said they were “too busy”. Really they knew too much… “Too busy” meant too busy to die. It also meant too polite to point out the obvious.

The narratives of the explorers and the father mirror one another in both hubris and decline. The friends pose for photographs as they set out. And these are set against pictures from the father’s younger days. In them he is invulnerable – a Desperate Dan.

grinning into the camera lense, pretending to shave himself with his axe. Two tall-tale points are being made: that his axe is as sharp as a razor, and that his bristles are so tough that only an axe could cut them. It’s highjinks, a canoe-trip joke. Although secretly, of course once believe both of these things.

Although the father revels in the explorers’ failure to properly plan, their poor choice of route, their fatal failure to lay in enough moccasins for the expedition, it is clear that his own journey echoes theirs and that, in the end, all the supplies and preparation in the world would not have sufficed for him.

I think of the array of almost new boots and shoes in the closet; boots and shoes that have proliferated lately. He keeps buying other ones. If only he can find the right pair, he must think, whetaver it is that’s causeing his feet to hurt will go away.

The explorers choose to follow the wrong river, though they may have been doomed anyway. Eventually, they climb a hill and reach the inevitable moment of realisation. They press on. Hubbard drops out first, then Wallace. At last only George the guide keeps walking – ostensibly to fetch help, but in fact to pursue the his own survival – the only hope left.

The story hinges, probably, on the moment that the father is felled by a stroke and he, too, is beyond rescue.

This time it knocks out half the vision in each eye, and his short-term memory, and his sense of where he is. From one minute to the next he has become lost; he gropes through the living room as if he’s never been in such a place before.

This is not for him a moment of revelation, because he has lost not only his bearings but his own self. The story pinches here, though, all its lines converge. The father imagines himself on his own wilderness trek and knows he is beyond rescue.

“I want to go home,” he says. I know there’s no point telling him that home is where he now is, because he means something else. He means the way he was before.

Ultimately, I suppose, this is a story about story and about its uneasy relationship with the world beyond its order. The explorers imagine themselves actors in a grand colonial narrative but even their doom fails to bend to its tropes – their fate is random. The father, the rational planner, is deserted by story too in the end – without short term memory, he literally loses the plot.

Stories are no good, not even short ones, because by the time you get to the second page he’s forgotten the beginning. Where are without our plots?

The narrator enters her father’s fantasy to reassure him about food and firewood, but he is not convinced. Perhaps, there is nothing to do but to lay in supplies and light out for help. Like George the guide, though, we really push on alone.

Later that day my mother says to me. “So you’re… Matt?”

“That’s right,” I said, my tone encouraging — as if we were achieving something and not, in fact, drifting away.

In the night, she phoned a friend and said that A was dying. She had remarried some years before. A was ill, and this had filled her with despair before her own aggressive disease descended. If he was dying, though, it was at a pace almost indistiguishable from living.