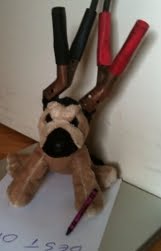 I was discussing my ten minute technique with some friends last week. One of them asked whether it was hard to get into the right state of mind to write for such short sessions. Surely I’d spend most of the time just getting into the mood?

That was a very good question, it turns out. I haven’t found it especially hard to arrive at that slightly trance-like state you need for words to flow, at least not all the time. And it occurred to me that this part of the process should have been more difficult. After all, it always has been.

So I returned to an essay (a lecture, really) by Robert Olen Butler called The Zone. It’s from his collection From Where You Dream. Here’s what strikes me as the take home package of the lecture:

There are no excuses not to write. At some point in my life, for various personal reasons, the only opportunity I had to write was on the Long Island Rail Road as I commuted from my home in Long Island to a job as editor-in-chief of a business newspaper in Manhattan. This was before laptop computers. I wrote every word of my first four published novels on my lap, on legal pads, by hand, on the Long Island Rail Road, where the air-conditioning never worked in the summer, and the heat never worked in the winter, and it was always jam-packed, and people were flapping their papers and yakking and killing each other over the wrong bridge bid three seats up in front of me.

But eventually a thing kicked in that psychologists used to call functional fixedness. That is, if you have a certain place and certain objects that you associate only with a certain task, eventually the associational values build up in such a way that when you go to that place and engage those objects, you are instantly completely focused on that task. So getting over the hump of distraction with those railroad trips eventually be- came an asset, because writing was all I ever did on the train; I did nothing else. And I began to write well. I wrote my first four published novels on that train.

Having reread the essay I thought about the ritual I have developed, also by force of circumstance (I make no claim to write well, however).

I carry a netbook around with me. I boot it up, often while standing in line in some coffee bar or other. I fiddle around getting WiFi up and running. I plug in the USB drive which holds my various projects. I launch OpenOffice. I don headphones. Big, noise canceling headphones which give me a sense that I have retreated from the world, even though it’s right here, inches from me, screaming for a grande no-foam triple nonfat latte. Everything I do, pretty much, I do to a soundtrack. I don’t like silence. When I’m writing, I choose from a severely limited set of albums. The selection evolves over time so I don’t get too sick of it. I wrote a non-fiction computer book listening to an Essential Mix album over and over again. The first draft of my current project was written to Rachel Unthank and the Winterset. This draft demands the albums of RadioHead (from OK Computer onwards). I kick the music off. Finally, I set the timer on my iPhone. And yes, often then, I’m in the zone. My breathing is more regular, my focus is on my characters, where I left them last session. I begin to type.

Of course from one session to another this ritual may become less involved. I’ll already have my computer booted, music playing. By then, though, I only need a small cue. Setting the timer again turns on the heat beneath recently boiled water.

Written down, this preparation sounds very involved. In fact it’s fluid and automatic. Like driving a car or making a cup of tea. These are both complicated affairs when you break them down into tasks, but with repetition they become natural.

I’m not suggesting you do any of these things. Not a single one. Discover your own cues to get to Butler’s Zone. Whatever it takes. Wear a hat. Brew a particular coffee blend. Dance around in your underpants to Fol Chen’s Cable TV (don’t do this in Starbucks)…

OK. Hold the post. We need a moment’s silence for the greatness of that song… OK. Normal service resumed.

The point is, with repetition, and maybe a bit of luck, your mind could associate a set of cues with the practice of writing. Aspire to the mental state of a salivating dog, or a lever-pulling rat. It might be worth the effort.