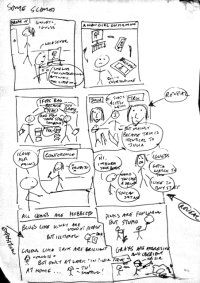 The Story From Hell (TSFH) still bothers me. Though I’m on the road now, and I get very little done in hotel rooms for some reason. It’s not as if I don’t have time, away from the day to day demands of my life. Perhaps it’s just that I no longer have a decent routine.

Anyway, in a recent draft I found myself despairing at TSFH’s sprawl. I had a list of scenes, sure, and I knew where I was going with it. But somehow I couldn’t keep my scenes spare and focused.

Finally, in despair, I turned my early scenes into a cartoon. Now, as you can see, I can’t draw even a little bit. But even limited to stick men and a ludicrously crude visual landscape, I found some real benefits to drawing out my scenes.

First of all I was forced to capture a single image for a scene or a beat. I tried to make my frames interesting. After a few attempts with two stick people at a table, I looked for more variety. I had my characters doing stuff. I played with depth too, placing one character in the foreground, with another responding deeper inside the frame. Because I could see when things were becoming static or boring, I was able to address it.

The limited space forced me to compress exposition. Occasionally I’d give a frame over to backstory or worldbuilding, but it was easy to see that more than that impeded flow.

Because I tried to map frames to scenes, I was forced to think hard about the central conflict and how to express it in a single stark image.

The visual focus also helped me to think about setting and symbolism. What objects  and environments reinforce the mood I’m seeking, how do they relate to my theme?

By drawing my story, I gained a birds eye view of my structure. I could see at a glance where the story sagged. I could see the characters that weren’t pulling their weight.

I’m not sure that I’ll be making cartoons out of everything I write, but this time round, it helped me fix ome story problems  that file cards just didn’t reach.

Now, of course, I’ve got to go away and find the perfect cartooning Ipad app — and that’s a bonus in itself.