Sympathy for the devil 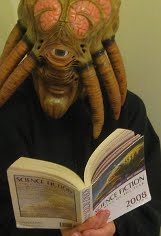 I have spent the last week working on the same scene, and I have been finding it hard to lift it beyond the realm of cartoon. Admittedly my story is an adventure, and I’m unashamed of a little evil mustache twirling. Still, I’ve fallen into the trap of making my villain all bad.

In fact I’ve had him do almost everything but twirl his evil mustache. Don’t get me wrong, he is bad. When it comes down to it, he does terrible, awful things. But then so do people who drop bombs on families in the name of freedom. There remains the old argument about means and ends. Good men do bad things.

Making someone bad for the sake of badness does not make a good villain. It’s true that such people exist but without at least some motivation beyond distilled badness a fictional opponent is unlikely to convince, and his scenes will remain flat.

In fact it’s not even enough to demonstrate motivation alone. You need to make it possible to empathize with the opponent. Even if your reader can’t actually condone Mr Evil’s plot to imprison the world’s dolphins, she should at least feel the anguish stemming from the childhood incident at Waterworld that scarred our antagonist so terribly.

In The Anatomy of Story, John Truby has this to say about a opponent’s motivation:

An evil opponent is someone who is inherently bad and therefore mechanical and uninteresting. In most real conflict, there is no clear sense of good and evil, right and and wrong. In a well drawn story, both hero and opponent believe that they have chosen the correct path, and both have reasons for believing so. They are both misguided though in different ways.

In fact, according to Truby, this often works best when the values of the villain and hero exist on the same continuum.

The contrast between hero and opponent is powerful only when both characters have strong similarities. Each then presents a slightly different approach to the same dilemma. And it is in the similarities that crucial and instructive differences become clear.

I found myself watching the movie Surrogates shortly after reading that passage, and I was struck by the fact that the movie’s hero and his antagonist both hold similar beliefs — a distrust of the story-world’s miraculous technology. They really fall out over issues of proportion and moral action, not of motivation. I’ll be returning to Truby’s book in future posts.

Even after I spent some time reworking the antagonist as a believable opponent, though, I still found myself having him descend into near-cackling and almost-hand-rubbing. I think this is because I’m sitting on the hero’s shoulder, and we all tend to demonize our enemies.

In the end I tried another trick. I rewrote the scene from the opponent’s point of view.  I tried to make him as sympathetic and believable as possible without changing his actions. Sometimes that just wouldn’t fit. I found that his behavior had to change. He became better-rounded, and his actions less caricatured. Then I re-edited the scene, altering it so that the character’s new behavior replaced the older cruder version, but observed from the hero’s point of view.

The result isn’t perfect, we’re still close to a first draft, after all, but I believe it’s a neat technique, and one worth trying again during the editing process.