52 Stories #7 – The Idiot President by By Daniel Alarcón 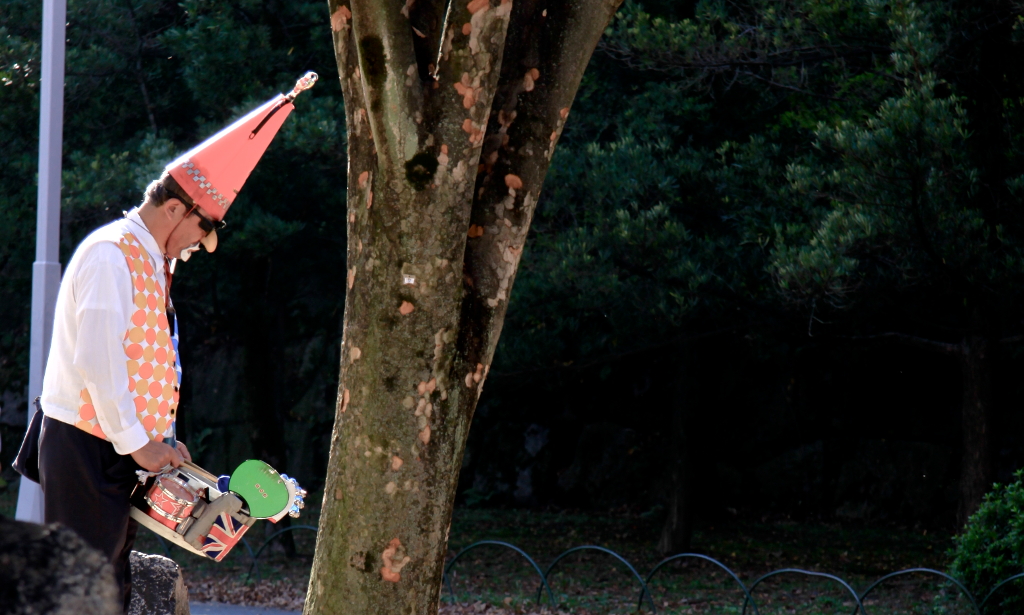 The Idiot President was published in The New Yorker in October 2008. Set in a recently war-ravaged South American nation, the story describes the two months a recent theatre school graduate spends with a traveling radical theatre group named Diciembre.

After last time’s incident-packed short story, this one can be summed up really in a few sentences. The narrator joins troupe members Henry and Patalarga to perform a play named The Idiot President in the villages of a mountainous region. He suffers horribly from the cold and from altitude sickness. He meets and makes a clumsy drunken pass at Tania, the ex-wife of Henry and second cousin of Patalarga. His brother has emigrated to the United States and the narrator is expecting a visa at any time. They finish their tour in the mining town of San Germán. There is a power cut but the actors perform anyway, lit by the halogen helmet lamps of the miners. The US visa never arrives. The narrator is still stuck in the capital city years after the tour has ended.

it was very funny, involving a delicate interaction between an arrogant, self-involved head of state and his servant. Each day, the President’s servant was replaced, the idea being that eventually every citizen of the country would have the honor of attending to the needs of the leader. These included helping him dress, combing his hair, reading his mail, etc. The President was fastidious and required that everything follow a rather idiosyncratic protocol, so the better part of each day was spent teaching the new servant how things should be done. Hilarity ensued.

The narrator plays the president’s son:

He was a boastful lout and a petty thief, who was a great source of pride to his father, despite his many shortcomings.

This is a story, as much about what does not happen as it is about its key events. The narrator’s brief crush on Tania is unconsumated, his visa to the States never comes. When the narrator meets up with Henry years later even Patalarga’s death — ‘he’s no longer with us’ — turns out to be a joke:

“I know,” Henry said, but then he was laughing. “The jerk moved to Barcelona. Imagine!”

“You asshole,” I muttered.

The story’s primary narrative is set in an in-between time in a society still in shock after war but not yet secure in peacetime prosperity. By the end, though, the prosperity has come but brought with it a settling — a sense of disappointment. The narrator, too, is in a state of suspension – he is waiting for a visa that will not come – waiting with more yearning than the narrative at first reveals. It is only when he meets up with Henry years later that we learn the extent to which the narrator’s expectation of a new life in the United States animated his time with the troupe.

He tapped his fingers on the wooden table. “Weren’t you supposed to go somewhere?” he said.

“Well, it was all you ever talked about out there.” He paused. “Every day, constantly. We figured it was the altitude. We could hardly stand it, Patalarga and I.”

In my recollection of our two months in the mountains, I had barely ever spoken of leaving. I’d carried the notion with me, of course, but had held this private reassurance very close, like a charm or a lucky coin. Knowing that it would all pass was what had got me through.

The narrator played Alejo, the son of the idiot president. As we leave him years later he is auditioning for a character in a soap opera who coincidentally bears the same name. But this is a smaller figure, less heroic in his villainy:

The character’s name was, to my great satisfaction, Alejo, and suddenly I felt more confident than I had in months. Though this character and the Alejo I had played with Diciembre were two entirely different people, reading the script felt like running into an old friend. How this country has changed, I thought: the son of the President is now an ordinary snitch, a man doomed to look over his shoulder for six one-hour episodes, and then die invisibly, his passing just a footnote to a larger drama that has little to do with him.

So, once again, we find a hinge point kicking off the story’s end. The narrator’s return to Alejo offers him a both a new optimisim, and a frame for his country’s transformation.

Peace is preferable to war – but it is also lesser, its dramas shadowy copies of what once seemed so vital. For most of us, if we’re lucky, life settles into a pattern like this. We wait for a promised transformation – and we wait, and the work we must do to sustain the wait eventually becomes the sum of our lives. But the issue is not only that the moment never comes for most of us. To the narrator, it’s that the hunger for change is itself depleted – waiting becomes its own end.

He reached across the table and pinched my cheek affectionately. “Son,” he added. “So why didn’t you leave?”

Outside, a phalanx of pigeons had landed in the avenue’s concrete median, swirling like a dust storm around an overturned trash can. I stared at them for a while, admiring their hunger.

“Everything got so good around here,” I said.

Henry nodded. “Of course,” he said. “That’s just what I was thinking.”

“The clown” by _Carl Nenzén Lovén is licensed under CC BY 2.0_