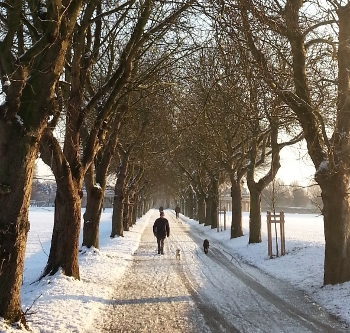 I was going to call this post Present Tension.. but then I noticed an article by John August that has already taken the name. Drats. But with good reason, it seems, because the literary use of the present tense has been irritating some very illustrious people in recent years.

John August’s post is largely a pointer to a piece by Robert Jackson Bennett which considers the present tense in fiction. For Bennett, the present tense engenders a sense of urgency, but whether the right-up-close-and-in-your-face-ness of the mode is a vibrant effect or an over-stylised irritant is less clear. A matter of taste, he concludes ultimately. Literary Marmite.

Present tense as a Bad Thing

No such fence-sitting for Philip Hensher who, in a 2010 opinion piece, compared the new popularity of present tense narratives to Japanese knotweed. He suggested that this invasive and choking tendency has various roots, including lyric poetry, the celebrity interview, the film treatment but most of all:

a thousand low-level creative writing tutors, clinging to the belief that you can “make your writing more vivid” by turning to the present tense.

Writing is vivid if it is vivid.

Where are these thousands of tutors? I imagine a kind of Mordor in which orc-like creatures are tutored in the shallow glamour of the present tense and then unleashed to despoil the rolling pastures of middle-lit.

I have attended my fair share of university creative writing workshops and, though I’ve seen some present tense narratives, most teachers I’ve encountered encourage their students to consider both the costs and benefits of their narrative choices. Having said that, Philip Hensher is himself a teacher of creative writing at Bath Spa University so he no doubt knows the profession.

The chief issue that many critics have with the use of the present tense in contemporary fiction is its popularity. It’s a faddish option. In the Guardian, Sam Jordison wrote of a lazy obedience to current fashion. In the same newspaper Philip Pullman wrote:

Hensher may be right when he says that some of the pressure towards the present tense comes from creative writing courses, and some from the influence of the film treatment. Some of it, as he also suggests, is simply fashion. No doubt it will pass

And yet all three writers enjoy the present tense when it’s used well. Jordison, reviewing Life! Death! Prizes! by Stephen May, wrote

there are good structural reasons for May’s narrator to be speaking now, rather than recalling, and the device adds considerable tension as the book moves towards an uncertain outcome.

Done well, it can be nervy and energetic – Hilary Mantel’s Wolf Hall used it to give Thomas Cromwell’s story an unpredictable edge.

Like any other literary effect, the present tense is an expressive device; but expression works by contrast.

So, the present tense is a poor mode when it is used reflexively, with only crude regard to effect or for the sake only of fashion. And it’s a good mode when it’s used well and with subtlety. Well quite.

Two present tense authors say a thing about all that

In fact many authors think very carefully about their choice of tense. Here’s Hilary Mantel on her inspiration for Wolf Hall.

The events were happening now, in the present tense, unfolding as I watched, and what followed would be filtered through the main character’s sensibility. He seemed to be occupying the same physical space as me, with a slight ghostly overlap. It didn’t make sense to call him “Cromwell”, as if he were somewhere across the room. I called him “he”. This device, though hardly of Joycean complexity, was not universally popular. Most readers caught on quickly. Those who didn’t, complained.

And the effect is vibrant, though not always easy. It’s a highly focalised narrative, both in temporal terms, and in terms of point of view. We don’t stray far from Cromwell’s mind or moment. This immediacy is especially interesting in the context of a historical novel in which, by definition, we know the ending. Because the future can’t be a mystery we embrace the past’s present.

Philip Hensher wrote that “the routine use of present tense in the historical novel is quickly becoming a terrible cliché”. This seems an odd claim. Can a tense be a cliché? Isn’t the boring old past tense a terrible cliché after all these years? (Clue: no). While metaphor and voice may require ceaseless innovation, we really only have a few tenses to work with.

Here is author Alex Adams interviewed at TerribleMinds discussing her decision to use the present tense for her novel White Horse:

The beauty of present tense is that it’s so immediate. The reader is right there as everything is happening to the protagonist. And it lends a certain feeling that anything can happen. There’s no foresight. With past tense you’re almost guaranteed that the protagonist survived the story’s events, and they’re telling their tale in retrospect. I like the uncertainty present tends lends to the situation.

But present tense is also extremely unforgiving. It’s the white pants of tenses. It can be tedious or too tell-y. And much like first-person, it looks deceptively easy. Solid prose can quickly become a list of events if you’re not careful

So everyone is agreed about this vibrancy thing, this immediacy deal. But as Philip Pullman argues, the present tense exists in a temporal spectrum.

Suddenly everything gets a bit timey-wimey

In his article, Philip Pullman suggested that the present tense is often a scream, a one-note effect.

This is hard to disagree with (though there is a case to be made for the purely in-the-moment-narrative). It’s not really a point about tense, though. It’s a point about focus. In fact there is nothing about the present tense that precludes a rich temporal spectrum, and nothing about a past tense narrative that promotes the same.

In a first person past tense novel there are at least two fictive threads. There is the past in which the tale unfolds, and there is the implied (and sometimes actual) present moment of the storyteller. So the older Tristram Shandy addresses the reader and he does so ‘now’, but he also meanders through his ‘then’ and that of his family.

So in this case, the telling is a kind of dramatised present tense, in which the narrator and an implied reader settle down and look back at the story proper. Sometimes the ‘reader’ is represented by an in-story avatar, such as the shifty CIA agent in The Reluctant Fundamentalist or the far future fireside listeners in The Cloud Atlas.

In Nabokov’s Pale Fire, the narrator is holed up in a motel, and his present miserable circumstances threaten at times to overcome his narrative.

…he marked his card or cards not with the date of his final adjustments, but with that of his Corrected Draft or first Fair Copy. I mean, he preserved the date of actual creation rather than that of second or third faults. There is a very loud amusement park right in front of my present lodgings.

It only takes a shift in emphasis for this telling moment to become a story’s focus. If, driven mad by the noisy fair, Kinbote were to get up now and kill the motel manager then the story would live suddenly and actively in the present. Of course, the implied act of narration would become problematic since it’s hard to write and strangle at the same time. A shift to third person (or, less commonly, the stylised second person address of The Reluctant Fundamentalist) could fix this.

So the present often frames the past. When the now becomes the story, though, the past then informs the present. People tell tales to one another, or they remember events that matter to them. Hilary Mantel’s Cromwell falls back to his childhood, his time as a soldier and, in Bring Up the Bodies, a haunting celebration in which courtiers mocked Wolsey.

And if the present is inhabited by the past, what about the future? Doesn’t the present tense preclude that perspective? The fact that the future seems inaccessible to a present tense narrative is one reason for this mode’s perceived immediacy. There’s a sense that anything can happen, the uncertainty makes us feel so alive.

But is the future precluded? This is really only true at the writer’s discretion. A novel can mix modes. It might include scenes set in the story’s future, but written in the past tense. Why not? This might be accompanied by a shift in register, a historical tone, for example. In Anagrams, Lorrie Moore used the present tense in some sections, and the past in others, though the scenes are laid out more or less in order.

An omniscient narrator might even shift into the future tense “Gerald sips whisky over ice. He has seven years to live, and it’s the whisky that will kill him in the end. Right now, though, he smiles and sips again.”

At the end of the present tense novel, The Thousand Autumns of Jacob De Zoet, David Mitchell telescopes the narrative into his hero’s future, and brings us swiftly to his death, a moment at which Jacob thinks back to the love he lost in the novel’s main story.

Finally, let’s not forget Wolf Hall and Bring Up The Bodies. The narrative never strays into the future in these novels, but the future is fixed, and certain, and it taints everything we read. It contradicts the characters’ every effort and hope and ploy. The present tense implies freedom, but we know only too well how things will turn out.

Wrapping up at last

Most critics of the present tense are careful to first praise good examples of this mode. Perhaps these writers are, in fact, taking issue with lazy and faddish writing and not with tense at all.

As with arguments about point of view, the real issue might be one of focalisation. A writer can tell a story in either the first or third person, and yet stay focused on a single character’s perspective. Her choice of person makes certain options easier but that’s all.

By the same token, a writer can tell a story in either the present or past tense and in either case never leave a single temporal thread. An author’s choice of tense has an effect but, nevertheless, a predominantly present tense narrative might range widely in time and a past tense narrative could easily stay fixed in a kind of event by event list mode (think about a certain kind of relentless fast-paced thriller, for example).

Philip Hensher is right. Writing is vivid if it is vivid. This seems to me a much better yardstick for judgment then a writer’s choice of tense.