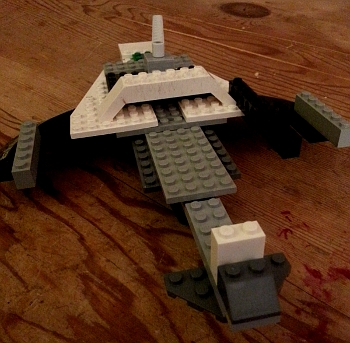 Well, quite a few people say that, presumably, and this was duly and cleverly pointed out to me.

But it’s an interesting question. Any story set in a teller’s future may one day be compared to the future itself, and well before that future arrives since a gulf can quickly open up. What? No Internet? Everyone smoking? Really? So there clearly is a measure by which a writer gets it ‘right’ or ‘wrong’.

We can go further. Some SF writers, including Robert Heinlein, Isaac Asimov, and Arthur C Clarke made prediction an important part of their mission and might be judged to some extent for their prescience or lack of it. Modern writers such as Kim Stanley Robinson have taken up this mantle. The Mars Trilogy and 2312 are crucibles in which the social and political implications of climate change, corporate domination, space colonisation and life extension are all intelligently played out. And already the early novels in the sequence reveal some of the kinds of anachronism Rohn enjoys.

The predictive function is a topic within SF narratives too, manifesting most famously in the psychohistory of Asimov’s Foundation novels. Hari Seldon applies a magic formula to future history and leaves guidance messages for generations to come. Until it all begins to go wrong.

But SF has other roles to play. Presumably if we count these up and quantify them, we might arrive at a working definition of the genre? Unlikely, says James Gunn in his introduction to Speculations on Speculation: Theories of Science Fiction.

Whew. Now I wished I’d just stuck with prediction. This thing’s a MONSTER. Looking at a couple of critical anthologies, I find a daunting scope, both in terms of themes within science fiction and critical approaches to it. There are essays on feminist SF, psychoanalytical approaches, postmodern theory. On marxist, postcolonialist, posthuman and cyborg themes. Essays on queer theory, utopian studies, on virtuality. And that’s not including the subgenres.

So let’s just think a little about strange worlds of the future. Any projected future owes most of its shape to the ground of its production. By which I mean it is like or unlike the writer’s present. Sometimes, maybe more often than not, it’s the interplay of difference and similarity between the time of writing and the portrayed world of the future that forms the project of a science fiction story. By creating a similar but different world, a writer can satirise or advocate or theorise, can warn or urge. The mission is–can be–cultural and political, rather than predictive. And in that sense it is a mission of the present (the present of writing) and not of the future. So reading after the fact, sometimes long after the fact, we accept a work’s cultural context, we find resonance in it, either new or enduring, and relating either to our own time or the moment of production. We don’t condemn it for failing to predict the fall of Soviet communism, for not anticipating Angry Birds or Celebrity Big Brother.

Speaking of Big Brother, when we reread Orwell’s 1984, we don’t judge it a failure for its divergence from the actual 1980s. In fact, we read it as an exploration of a particular kind of ideological totalitarianism, and we find nuances in it we can apply to our own time (the way that opposition is subverted to shore up rather than undermine the dominant ideology). In fact, by setting a date, Orwell’s novel neatly places itself outside the realm of prediction. Its very specificity gives it a pass. (UPDATE: a commenter on Jenny Rohn’s article claims that an interviewee on BBC Radio 4’s Today Programme accused Orwell of ‘getting it wrong’(!))

1984, of course, follows on from Huxley’s Brave New World in its dystopian vision (another vision that still resonates — a wilfully ignorant elite drugs itself while others are left to rot). And we can trace this mode of writing back and back, utopias and dystopias scattered through the ages, until we arrive at Plato’s Republic.

In his essay The Roots of Science Fiction Robert Scholes argued that SF is a ‘special case of romance’:

…this tradition always insists upon a radical discontinuity between its world and the world of ordinary human experience. In its simplest and most ancient form this disconuity is objectified as another world, a different place–Heaven, Hell, Eden, Fairyland, Utopia, the Moon, Atlantis, Lilliput.

The future is just another of these worlds, and even then it may be more Hell (1984, Brave New World) or Heaven (Iain Banks’ Culture) than prediction. Not all SF is satirical or didactic, but any strange world invites comparison with its originating culture. This difference tends towards breach (the brutal meritocracy of The Republic) or exaggeration (Swift’s mad scientists extracting sunbeams from cucumbers).

Even though the main project of a future-set SF novel may not be predictive, it’s stubbornly true that anachronisms are often disconcerting and work against immersion. Although alienation can be an effective literary trick, unintentional alienation often seriously backfires. It’s the difference between a deliberate and an accidental pratfall. Ironically, the more plausible an SF story’s future world appears, the more incongruous any divergence from the actual future can seem.

In fact SF/F faces similar risks when it creates new worlds set in the past. Alternative history (most recently, perhaps CJ Sansom’s Domination) must be meticulously researched so that a divergence from actual history can seem plausible. Time travel novels require similar effort. Connie Willis’s book Black Out about the adventures of some very dull time travellers during the Blitz was criticised by British critics for the accidental inclusion of the Jubilee Line (opened 1979) in the wartime tube network. This kind of error can puncture a story. It’s like seeing a coke can at the Last Supper. Unfortunately fact-checking alone would not have rescued Black Out.

So even if SF is rarely ‘primarily about prediction’, I think Rohn is on to something in her article. We do find certain kinds of predictive inaccuracy disconcerting no matter the mode of the story. Why is it, though, that these ‘errors’ are more problematic than other, glaring, divergences from reality (explosions in space, sounds in vacuum)? I think that might need a separate article.