Stripped down to gesture 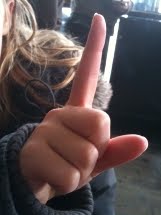 I’m writing again. Covering about 1000 words a day. Of which I’ll probably throw away most. I allow myself to digress shamelessly, my dialogue stalls or gabbles, my descriptions veer off into shadows and under floorboards. Let the editor sort it out, I think. And – well it’s word count after all.

I don’t believe unusable words are wasted. In a way, having an outline is giving me the freedom to ramble. I can stray from the path because I have a map now. The map puts me in the right general place, and then I can explore. I can always correct my course in the edit. Or maybe not. Maybe I’ll discover something rich along the way. Maybe it will be good enough to make me redraw the map.

I’m also experimenting with tricks and techniques along the way.

For my current scene I started by stepping roughly through the action and dialogue. I need to feel that nothing counts about this. Otherwise I’ll stall and stare at the same sentence for half an hour.

Then I wrote the same scene entirely in gesture. No dialogue allowed, no reflection. Just movement and expression. The narrowing of eyes. The stabbing of fingers. The slumping of shoulders.

Finally I started again. This time I was only allowed to describe the inanimate world of the scene. The pattern of cracks on the ceiling. The way that the curtains are mismatched. An improvised chimney made of old tin cans. Could my description support the action and mood I had in mind?

You could, of course add more and more layers here, but I stopped with draft, gesture and setting.

I’m about to begin the process of combining these three strands into a composite whole. I guess it will be a bit like an animator layering gels build a sense of depth

UPDATE It has been a useful exercise. I think the scene has more depth than it would at this stage in a draft. On the other hand, as predicted, I’m throwing away a lot of duplication, and I’ve poured more time into one scene that I can perhaps justify at this stage of the game. I’ve had to watch out for crowding the scene, too. Too much description can slow the action down. A reason to make yet more cuts. I think I will reserve the technique for the edit/rewrite stage, and concentrate on covering more scenes faster. I have some tricks I’ll cover in future posts that help provide focus even with the first draft.