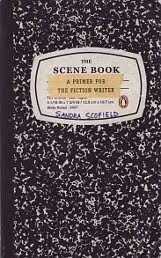 When I was working on my first draft I jumped into a scene by starting to write. Then I watched with interest as a scene or a chapter took shape. Sometimes the result was pleasing. Other times it stank.

A particularly annoying feature of this pot luck process was my inability to define what it was that drove a scene to success or failure. I never really knew why a scene worked when it worked, and why it stank when it stank. It seemed a matter of luck and inspiration. Clearly not a sound basis for authorship.

This time round I’m looking for a balance between planning and freedom. I want to let the characters breathe if I can, at the same time I’m looking to ensure some essential scene characteristics. I’m experimenting with some of the ideas in The Scene Book: A Primer for The Fiction Writer by Sandra Scofield.

Scofield describes these core elements of a scene:

Event is what happens in the scene. It is the sum of the actions. As Scofield puts it, ‘actions + actions = event’. This might seem obvious, but I think the key here is that there is something singular about an event. In other words a scene is not simply a scatter of occurrences. Instead these occurrences must coalesce into the event that defines the scene. This event will have meaning that may be made explicit within the scene, or may only become clear in the wider context of the story.

Beats are the actions that come together to make up the event. If you outline a story in scenes, you might outline a scene in beats. They are the things that happen. The percussive sense of the word is useful. It implies a tick-tocking of action and reaction, a rhythm underpinning movement. Even if a scene is 80% description, still at its heart there must be a pulse to drive it forward.

“The term beats refers to the way one breaks down events into small steps of action, making it possible to evaluate whether those steps move the action effectively towards the culmination of the scene.”

A scene’s pulse is the force of desire that drives the actions of a scene. Scofield says:

“There is a driving, desire, need, or question that runs through a story.”

This pulse drives action, which culminates in the scenes event. All these elements must be present, and proportionate, Scofield argues.

I think that perhaps this is the most important thing to bear in mind. As I write, I try to remember that whatever happens has to matter to someone. Desire is the engine of story. Though as Aimee Bender argues in her essay (discussed earlier), this desire need not, should not, be entirely clear. A person may act against their conscious objectives. But somewhere there is a pulse of need, however mysterious, and the reader must perceive it.

Tension is the grit in the machine. It’s the tease. The delay of gratification. Tension can be raised and released within a scene or across scenes. Either way, tension is the most directly manipulative scene component that Scofield discusses. It’s often used as a mechanism for pulling a reader on through a story, most obviously through hooks, or cliffhangers, at the end of key scenes or chapters. Will he pull the trigger? Will she tell him about the affair? What happened after she sighed, whispered a short prayer, and snipped the red wire?

You build tension by

You can’t wind your reader up indefinitely. Either she’ll explode or (more likely) throw the book across the room. Scofield lists a number of ways that tension is released (or deferred):

In a later chapter Scofield also examines the concept of negotiation to resolve tension. This is a twist on the traditional adversarial model in which two characters seek a language that diffuses their conflict. They find ways to come to an accommodation. This is covered by the first two bullet points above, but Scofield provides and analyses examples of these negotiating strategies.

There’s much more to this useful book, of course, including chapters on image (grounding your scenes in the world of the senses), openings, and action. Notably there are useful chapters on applying these ideas both to an edit and to initial writing. I’ll return to some or all of these at a later date.

Knowing that I should be able to find these characteristics within a scene is a start. But how do you incorporate them into the writing, and how do you do this without descending into a write-by-numbers methodology?

I’m experimenting, at the moment. Here’s where I’m currently going. I open a document for my scene and paste in the summary I produced during outlining. Then I try to answer these questions.

A couple of times I’ve found that I can’t answer the third question to my satisfaction. Of course you can always find a simple motivation. ‘He crossed the road because he wanted to get to the other side.’ Clearly that’s not enough to interest even the most forgiving reader. In coding we’d call that a smell. That is a strong hint that something is not right. It probably means that this does not need to be a scene, or that I haven’t thought enough about what I’m doing with it. Often, though, I have answers I’m half way happy with.

And then, I don’t write the scene.

That is, I give myself permission to ignore everything about the notes I’ve just made. I free write around the scene and its themes. I found that if I try to produce a careful draft I become self-conscious and stilted. So instead, I look to write three or four versions of the scene with my notes in mind, and then use my initial answers on the edit.

And how’s that working out for me? I can’t speak to the quality of my writing. But I do, at least, feel more confident in my purpose as I move from scene to scene. As I progress through Part 1 I’ll monitor how my practice evolves, and report back. It will be interesting to see whether I’m able to internalize this and other techniques, or if I need the formal process to keep me focussed.